It's Alphabe-Thursday over at Mrs. Jenny's again and the letter of choice this week is C, but at OUR house there's a different kind of party going on, 'cause it's time to (drum roll please)... 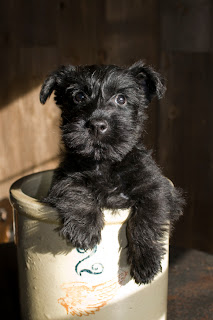 He is Called Albert. When he first Came to live with us, he was a wee thing and fit in a Can (Prince Albert in a Can...get it?)...well, actually a Crock. He's quite the little Chowhound, so he's way too big to fit in it now. 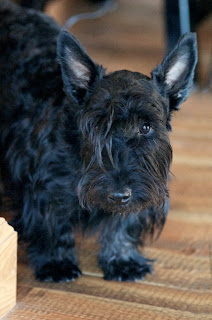 As you can see, he was (and still is) Coal black. He's a bit of a Character and has been known to don a Costume or two, but for his birthday, he was feeling Cantankerous and said "no way". He did wear the bow tie for a split second, but the hat...no no. 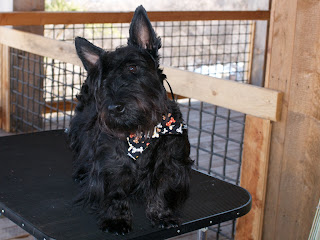 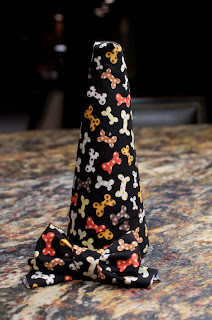 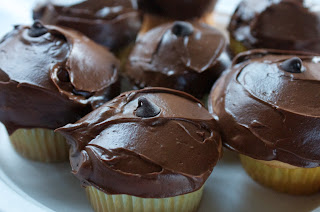 No Chocolate Cupcakes or Candles for him...they're not good for dogs, but he did get some new Chew toys and Crunchy doggie Cookies. 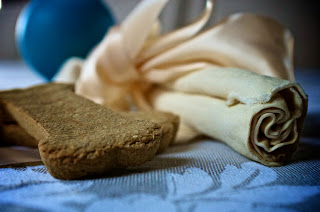 Albert's a little Cuddler and loves lots of Contact. But he's most Content to be a Constant and often Clingy Companion to his older Cousin, Jake (their mom's are sisters). 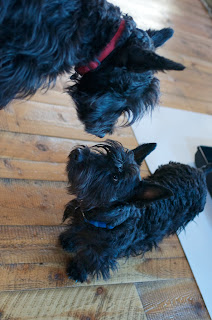 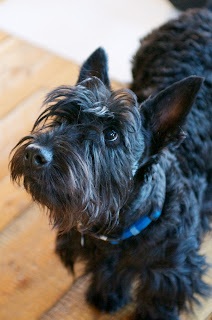 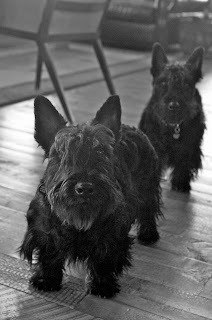 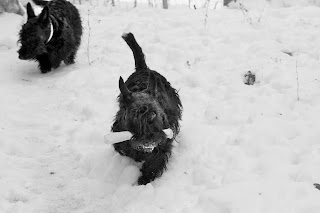 He's a total Copycat and insists on doing whatever Jake is doing. He's Curious and has to know what's going on at all times. He's a Courageous Critter Chaser, especially Chipmunks and deer. 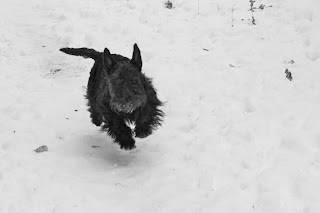 Posted by anitamombanita at 10:02 PM

Hello.
I'm a dog lover & Albert is gorgeous. Look at that face...makes me want to just kiss it up!
Awesome photos. Give Albert an extra hug from me (lol).
Thanks for sharing & visiting. I appreciate the comment.

Cry Not For Me

He is adorable! My Dachshunds refuse to move and shoot me the evil eye if I dare to put a hat on their heads. Costumes? Fine. As long as nothing is on the head! :)

Albert is so handsome!


Have a great Alphabe-Thursday

I hope he had a wonderful day! What a cutie!

Aawww...Albert is CO cute! What a face! Happy birthday to him!

Your Albert is such a darling scottie! I can see he has a lot of personality.

Dear Albert, You don't know me, but I think you're very, very cute. When you get a bit older, perhaps your 'mom' will allow to you carry on an inter-species relationship with an older woman.

Those first & last pictures are great! He is definitely a cutie!!

I think Albert is adorable. If I ever get a small dog, then this type would be one of my first picks. Happy B-day, Prince Albert!

Happy Birthday Albert! We were so thrilled that you and Jake came to visit us on your Special Day. You and Jake, you are such fun boys. Oz had such a good time roughing it up with you. We love you guys.........AND Your naughty cousins Gus and Mitch promised to be in a better mood next time you come to visit.

Albert is a cutie! We have Rory at our house, a Cairn terrier. I love the terrier curiousity.

We had a one year birthday party for Lizzie, and served doggie ice cream. It cost more than people ice cream, so it will only be a once-a-year treat!

AW! Happy Birthday! SOOOOO Cute! (Both Albert and Jake). Love his name...Prince Albert in a Can :o)

Blessings & Aloha!
Thank you so much for visiting an d for your congratulations :o)

Oh my gosh I love Albert!!!!! Don't you love those baby pictures before the ears pop up overnight?! Ladybug had one up for a couple of days before the second one popped up. It was hilarious! She has started to get more silver running through her face hair now. But she was a total blacky when she was a pup. Thanks so much for stopping by for a visit!

Your Albert is adorable...Dogs Rule!!

I just saw this type of dog for sale on Kajiji last night. It was very tempting.
Dana

CUTIE for sure! Late happy happy to Albert...and a hug to Jake too:)

I'll be happy to eat one of those cupcakes in his honor!

Thanks for the smile!

This was really a clever and sweet link to the letter "C".