Alphabe-Thursday, Round 5, starts today over at Mrs. Jenny’s. For newcomers, this means that followers who choose to play along do a blog post each week that corresponds to the letter of the alphabet for that week, starting from A and going to Z. OK, now that we have that out of the way… we’re at the start, meaning the letter A.

For those who are not newcomers, many of you have asked me to keep the Patagonia photos coming. I can’t promise that I’ll do it all year long, but with 4800 images in the stockpile, I’ll give it my best.

So, for this week, A is for Amigos. 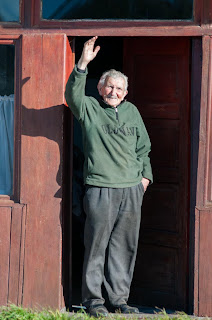 In the small town of Puerto Guadal, Chile, we were taking an afternoon stroll when we were greeted by this sweet 87 year-old man. He stepped out of the doorway of his hostería (a small hotel) and waved to the hubs, saying, “take my picture”. The hubs pointed at me, saying “she’ll take your picture”… and so I did.

He invited us in and introduced us to his two friends. 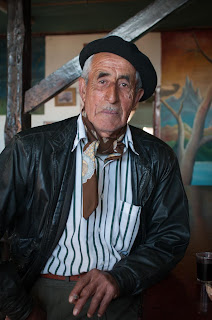 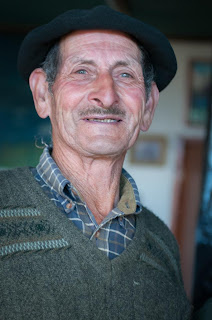 He gave us a tour, showing off the paintings and wood carvings that he and his son had created which adorned the walls, and proudly taking us into the kitchen where meals are prepared for guests. 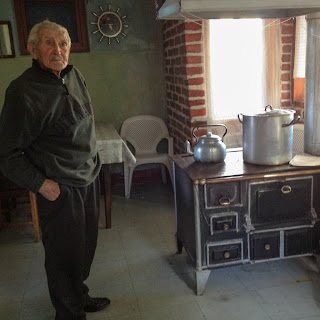 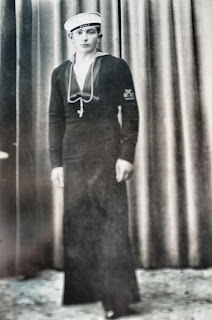 He told us about his military service (in the Navy) and showed us photos of his wife, children and himself as a young man. (He totally reminded me of the hub's Uncle Donald with his love of his family and his country, not to mention that they actually look a little alike). 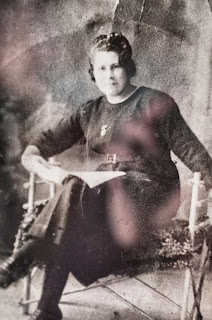 We spent a good half hour just chatting with him and his friends. In my many travels to Patagonia I have met numerous people like him. They invite total strangers into their homes and turn them into friends. I love the Chilean people. They are warm and friendly. They are proud without being pretentious. The gentleman in the beret and leather coat is typical of the people we see and meet…I love the elegance and dignity of the humble cattle and sheep ranchers who live simple lives. (And there we were schlepping around in our scruffy hiking clothes). 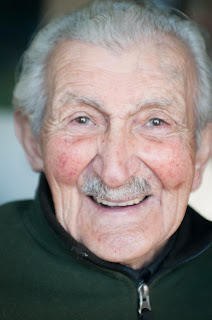 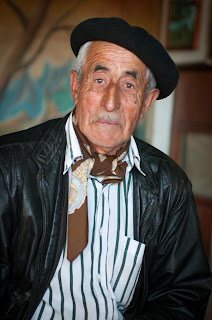 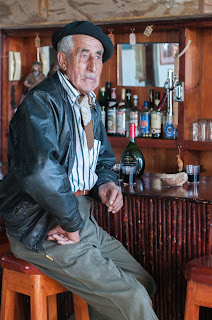 A is for amigos...the three amigos you see here and the ones we make along our various journeys in life. 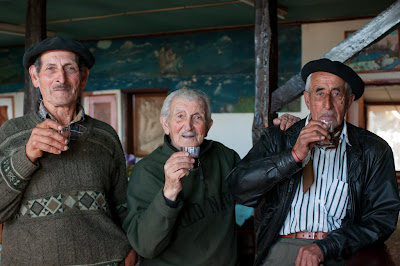 Click HERE to visit the other Alphabetarians over at Mrs. Jenny's. You never know; you just might find a new amigo of your own!

Posted by anitamombanita at 8:10 AM

What a beautiful A post. The old gentlemen are still enjoying life. Good for them

Anita, this is just awesome. I'm really impressed at the hospitality of this great old guy. His friends are so photogenic, too. Loved this post for the letter A. The three Amigos made my day...

How fortunate it is that your had the privileged to meet these three amigos!!!

How fortunate it is that you shared 'em with us.

What a beautiful post this was sweetie. I felt like I was right there in the abode with ya'll.

God bless and have yourself a fantastic day sweetie!!! :o)

Wonderful faces. I wish they were in our HIs Children book!

Oh these are wonderful. To be so fortunate to meet people who are just willing to talk and say hello. And wonderful pictures of them as well.

Anita, what a wonderful experience! I love your photos of the three amigos.

Love your photos - And what a great post for the letter A with the three Amigos!

What a wonderful A post...creative and inspiring both! Great photos too!

What a treat! What an adventure!
I met some people who were friendly like that (invited us into their home) when I was in England years ago.

Great faces. Thanks for sharing.

My dear Anita,
You make this sound so nice and interesting. All life is beautiful and important. Good job here my friend.

Lovely post! I think the best way to really know a place is to visit with their people. What a gracious people, this will have to go on my list of places to see. I think your photos tell so much about the quiet dignity of these men. Thank you for sharing and reading my post.

What a wonderful post. They do look so proud and regal. How great that you were able to meet them.
Thanks for glimpse of your travels.
Dana

Catherine - Our Village is a Little Different said...

I'm loving this series already! What a beautiful story, down to earth people, and a wonderful chance you've encountered.

Visiting from Miss Jenny's. Great start to another round♫♪

If anyone ever asks me again why I travel to unusual places, I'll show them this post.

Each picture is a work of art.

These faces have such a lot of character ideal for a painter !
What a nice gesture to invite you in their home.

Visiting from Mrs Matlock’s, many thanks for stopping by.

Have a great Memorial weekend too!

The photograph of the man in the beret and striped shirt is priceless. Wonderful

My dad visited Chile many years ago as a student and still tells us stories of his experiences there. These charming gentlemen would be a welcome sight. Thanks for visiting The Simple Life.

Anita, I like your three amigos find. Their stories as you told them were great. :)

I can just barely remember the movie, The Three Amigos with Steve Martin, Chevy Chase and Martin Short, but with a little bit of Google work I could get a memory refreshment.

Thank you for peeking in on my "A" for the Model T Ford up to its axles in mud.
..

These three amigos are really amazing!

And I heart that stove, too...BIG TIME!

Can't wait to see what you have for the letter B.

What a wonderful 'A' post! You can truly say you've met three Amigos, can't you? LOL And, as always, I do love your photos. You really capture the essences of the moment well.