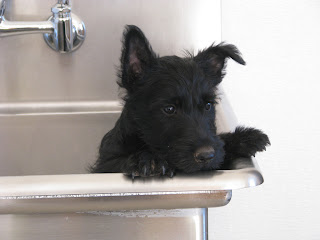 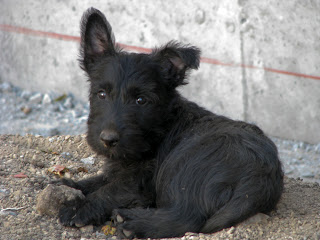 And so we celebrate this handsome, smart, affectionate (on his own terms), feisty, tenacious, sweet, sociable, mellow, friendly and loyal Scottish Terrier. 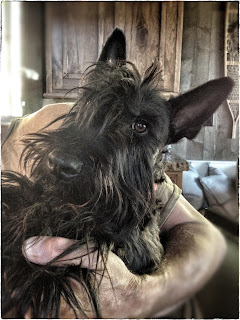 He's slow to rise in the morning, luxuriating in his bed and enjoying a good long stretch before following Albert, his young pesky cousin and best dog friend, out the door.

He learned his obedience and will do anything you ask, so long as there’s a treat and nothing more interesting going on.

Generous with his toys and personal space, he shares willingly with Albert.

He loves walks, hiking, rides in the car, chasing butterflies, and arranging the couch pillows just the way he wants them. 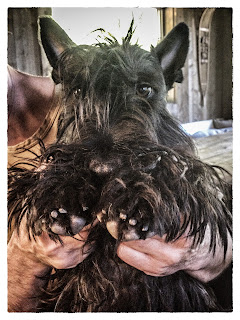 He loves affection, but doesn't like to be held longer than necessary.

He's talkative and will carry on quite the conversation with you if you are in a chatty mood....arrr-ooo-ooo aroooo arooo.

He loves meeting new people and is our official greeter. If he knows that you like him, he will eagerly greet you EVERY time he sees you, like his long lost best friend.

He loves pretending he's a race car and doing laps around the coffee table with Albert at top speed. 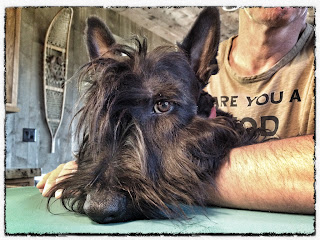 He has the most soulful brown eyes imaginable; they will follow you from under his eyebrows even when it seems he's not watching.

He's not overly fond of getting wet, would rather not have a bath or be groomed, hates having his toenails clipped and refuses to be turned over on his back by anyone, except me.

He's one sweet boy. We love him and are so happy that he's part of our family. And now he's a big boy – two years old! 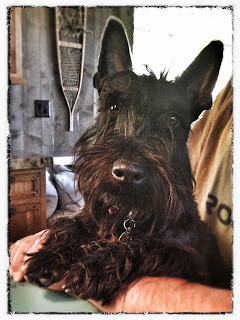 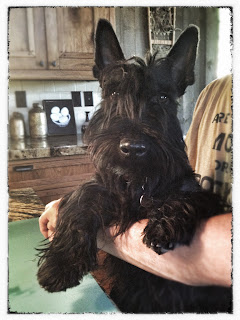 Co-ink-i-den-ti-cal-ly, it’s also Saturday Centus, and Mrs. Jenny must have had an inkling it was Jake’s special day when she dished up this week’s prompt (in red above). She told us we could have 100 words, plus the prompt and any photos we wanted. Since it’s Jake’s birthday, I took the liberty of taking 2 generous scoops of words. I’m sure she won't mind.

Be sure to head on over to Mrs. Jenny’s place and see what flavor the other Centusians have chosen for their parties.

Posted by anitamombanita at 12:30 AM

happy birthday, Jake - such a doll and clearly photogenic! thank you for arranging a doggie fix this morning. we still miss our old boy, Bandit.

Our Cairn Terrier Jack is 7 years old. Yesterday he ran off when I unfastened his leash. My husband finally caught up with him about 1/2 hour later. I was so upset with Jack for not minding and taking off after a squirrel, ...until later that night he saved us from getting bitten by a scorpion when we were down on the farm!

I have two dogs, so I know what a joy dogs are.

Happy Birthday, Jake. It's nice to meet you. You are the very first Scottish Terrier I have ever met. You have lovely eyes, under that hair, full of expression!

WE had a birthday party for Little Liz last year when she turned one! Rod nixed it for this year because we are in the midst of moving. We haven't moved yet, but it is close. Jake is quite a handsome fellow! Happy Birthday, Jake!!

Happy Birthday Jake! You are adorable - and so is your buddie.

He does look like such a special friend. Of course, I've never met a dog that wasn't a special friend. Happy birthday Jake! I am still smiling over learning (through your comment) that, in my rush to post for this centus, I didn't read the prompt correctly, but you turned it into a joke in your comment. I loved that! laurie @ http://dealingwithmyinnercritic.blogspot.com/

What a sweetie and such a nice birthday post!

Aroooo to YOU Jake boy!

Blessings & Aloha!
Thank you so much for also stopping by and for your sweet comments :o)

You can have all the words you want to celebrate your big day!

You are an awfully cute little guy! Hope your day was wonderful!

Cute, cute, cute use of this prompt.

Thanks for the smile.