We barely watched any of the Super Bowl this year. To be honest, I didn't even know who was playing until yesterday. I hadn't watched football all season, so there was no real draw for me. And we'd seen almost all of the commercials before the game even aired, so there was no surprise in that either.

Nonetheless, the TV did get turned on at some point, just in time for Jake to discover that there was a game going on that he found highly interesting. After watching, he and Albert mixed it up in a little game of their own. Not to worry -  although Albert is quite a bit smaller, he's a scrappy little dude who can hold his own, and no-one got hurt! 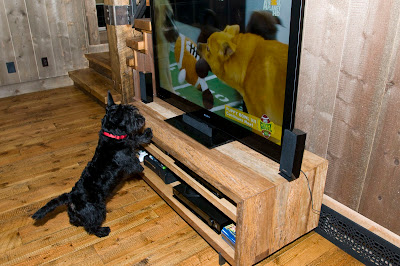 Posted by anitamombanita at 11:21 PM

Nothing like a mini dog fight on Super Bowl day!