While the concept of time is interesting, so is that of timing. 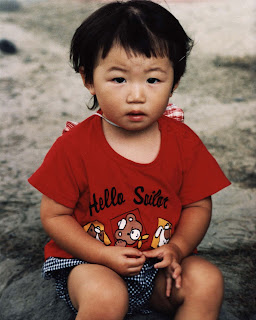 For weeks, maybe even months, I've been trying to organize my office. I still have boxes that need to be unpacked, art that needs to be hung on the wall and things that need to be filed away. Today, in an attempt to move that effort forward, I was going through some old letters and photos and came across some photos and letters from Japan. 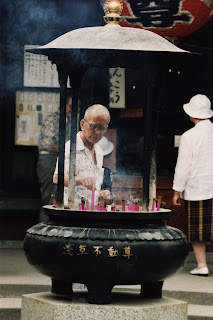 I had been in Tokyo on a business trip in 1992. Having a free afternoon, I headed to Asakusa where there is a popular Shinto shrine. I was wandering around, taking photos (surprise surprise), when I was approached by a young girl and her mother. The mother had encouraged the girl to try to practice her English with me. They were very nice and I was happy to talk with the girl (the mother spoke no English). When we were done, the girl asked if her mother could take a photo of both of us and then she took a photo of me with her mother. She asked for my address so she could send me a copy of the photo. She seemed appreciative and we exchanged addresses.

Shortly thereafter, I was approached by another young girl about the same age, and the same scenario played out once more.

I didn't really expect to hear from either girl, so I was surprised when I received meticulously written letters from each of them not too long after I returned home to the states. Both girls became my little pen pals and we communicated back and forth for a couple of years, after which our letter writing fell by the wayside. Among the things I found while cleaning my office today were some of those letters (click on the image to enlarge it). 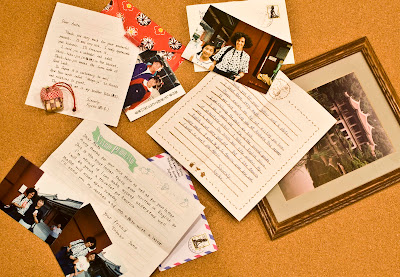 It made me wonder what had become of those girls, Takako and Kyoko. Were they still in Japan? Were they and their families directly affected by the events of this past week? I have no idea, but I hope that they are alright.

Timing is interesting. Had I not been cleaning my office this particular week, I might never have given those letters and photos or those girls, now women,  a second thought. I'm praying for you, Takako and Kyoko.
Posted by anitamombanita at 12:24 AM

I certainly hope they are okay too.

I love this post. And I love that you, in typical Anita fashion, struck up a friendship with these two that lasted beyond the moment.

I also love that you are praying for them now.

(i just joined you)

What perfect penmanship! Wow- I hope they are okay!

what a neat story!