While some of you are enjoying tulips and daffodils and that thing that's called spring, here the snow is blowing over under sideways down. It's barely 30 degrees outside and I refuse to photograph snow one more time this season. Seriously. (Well, unless there's some phenomenal naturally created piece of ice sculpture or the sun is glowing pink on its surface or something like that. LOL)


But in the meantime, I'm turning my mind to other more important matters. Like this... 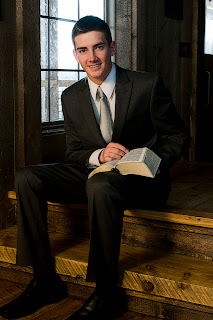 It's been years in the making -
years of preparation -
for the day this young man
would take his separation
from family and friends
and days of youthful playing
to share things of importance -
things that don't bear delaying.
That day has finally come
and he's ready to serve
with no thought for himself
he'll do it with verve.
His hair has been cut,
the tattoos no more.
They washed down the drain.
He's clean to the core.
The doctor's been seen;
his papers are in.
Now we just wait
'til it's time to begin.

Posted by anitamombanita at 9:06 AM

Wow, what a great picture of that handsome boy; I guess I should say handsome man. Our little Luke is all grown up!