Along with about 12,000 other people, we had the pleasure of listening to Elder Jeffrey R. Holland speak at Weber State University as part of the Pioneer Days Celebration this evening. Pioneer Days is a uniquely Utah phenomenon, celebrating the July 24, 1847 arrival in the Great Salt Lake Valley of Brigham Young and the Mormon pioneers who trekked across the country with him. 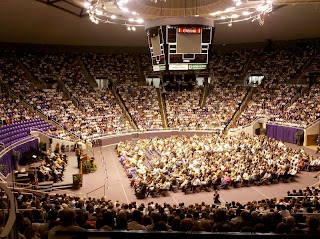 Elder Holland spoke about the different waves of pioneers who came here, and how many were concerned about the introduction of the railroad in Utah, fearing that it would bring outsiders who, being enemies to the Mormon Church, would seek to destroy it.

Brigham Young was quoted as having said that Mormonism “must, indeed, be a poor religion, if it cannot stand one railroad.”

He told stories of three different immigrants and how their settling here influenced the culture of the area. The first was a German merchant who decided to stay here and serve others who were heading west to seek their riches in gold. He became a successful businessman and a leader in the community.

The construction of the Central Pacific Railroad from Sacramento to Promontory brought more than 12,000 Chinese workers to America, mostly men who had left their wives and families behind in China. They were  not particularly welcomed in San Francisco where they landed, due in part to the large numbers of them, competition for jobs and the lack of understanding of their culture, but in Utah, where the Mormons, themselves, had experienced prejudice and persecution, it was said that they would experience no such prejudice. I'm not sure if that reflects the reality of the day or not, but as with the German immigrant spoken of previously, Chinese immigrants settled in and established successful businesses also.

The third story was of a Dutch family, who came for religious reasons, having been introduced to the Mormon church in their home in the Netherlands.

The point of his story was that while many see Utah as the place where the Mormons settled and the church has grown and thrived, Utah has a much richer heritage than just that. Different people emigrated here for different reasons. His message was that the roots of the community were built on diversity, neighborly love, respect for one another, etc. and that the future of Utah communities depends on that very same thing. It was a good message.
Posted by anitamombanita at 11:25 PM

And I love Elder Holland.

Anita,
Elder Holland is my favorite! You are so lucky to be able to hear him and be close by. Thanks for sharing this :)