While we're on the subject of missionaries, let me tell you about another one. While not officially my son, I think of Ryan as part of my extended family and even like a son. We recently asked him to speak at a youth conference, and without hesitating, he said yes. 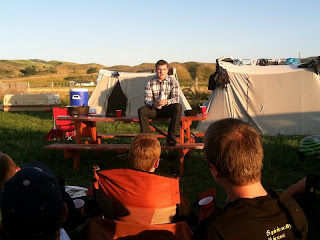 Were he to introduce himself, he would say he's an ordinary Joe, a stats nerd at BYU who happened to serve a mission and play some sports. But since I got to introduce him, I got to paint a little more accurate picture of who he is. Ryan was the US national rugby player of the year this past year. He was selected for the all-American traveling team this summer. He served a two year full-time mission in Romania, where he learned to speak the language fluently. He's not really a nerd, but he is studying statistics, a subject that most people stay as far away from as possible. He's smart, kind, funny, humble, selfless, a great athlete, a powerful leader and many more things.

I'm grateful for these fine young men who are great examples of how to live a good life and who are good sons. What a joy they are.
Posted by anitamombanita at 12:14 AM

You have picked up some pretty neat relatives along the way, Anita. And you are such a good supporter of them.

No wonder they love you!