Some days it's just not about the photo so much as it is about the subject. Today was one of those days. 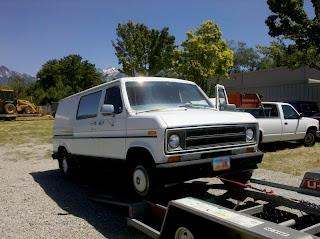 My husband is a very sentimental guy. That means that he sometimes has a hard time letting go of things that hold rich memories for him. The thing is, though, that he has a highly detailed memory and so LOTS of things are meaningful to him.

One of those things is a 1977 Ford van that has been in storage since 2003. It had been his parents'. His dad had fixed it up to be a perfect family traveling/camping van, and as such, there were lots of wonderful memories associated with it.

Since we now have plenty of garage space to keep it, it was time to retrieve it from storage. So, off we went to Salt Lake City to collect it. It was no small task to get in on a trailer, but he managed. On the way home he said "we've got to take it by my mom's house and show her", so we did.
My mother-in-law is as sweet as can be and funny too. (The first time I met her was at the end of my first real date with my husband. I remember him taking me by her house, ringing the doorbell, then opening the front door with his own key. Before I even saw her face, I could hear her voice yelling from another room, "So, are you married yet?!")
But I digress...back to my story of today. When we rang the doorbell and she looked outside, you might think she'd seen a ghost...a friendly ghost. Her eyes lit up and you could tell that she was absolutely delighted, albeit a bit puzzled. I know that there was an instant rush of fond memories of times with her husband, now deceased and much missed by her. Not having seen the van for so many years, to her it seemed as a miracle had occurred and the van had been resurrected. She had lots of questions about where it had been and what had happened to it. 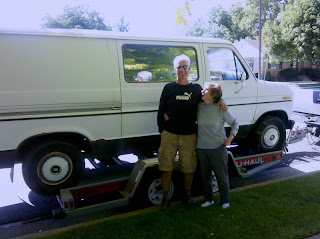 I wished I'd had my proper camera, but I didn't. I only had my cell phone with the battery about to run out, so this is all the evidence there is of that happy few moments when she was reunited with the resurrected van and thoughts of her beloved husband. It was a sweet tender visit and I'm so glad we took the time to go see her. 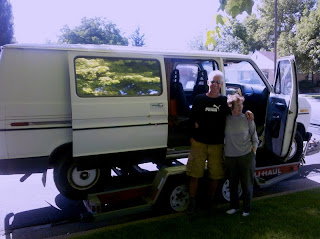 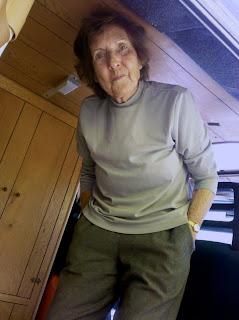 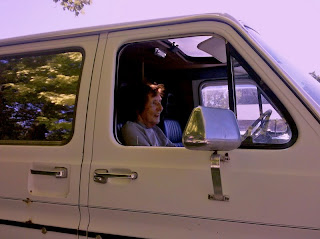 Posted by anitamombanita at 10:29 PM

What a great moment for her!

That is so sweet! I just love it.